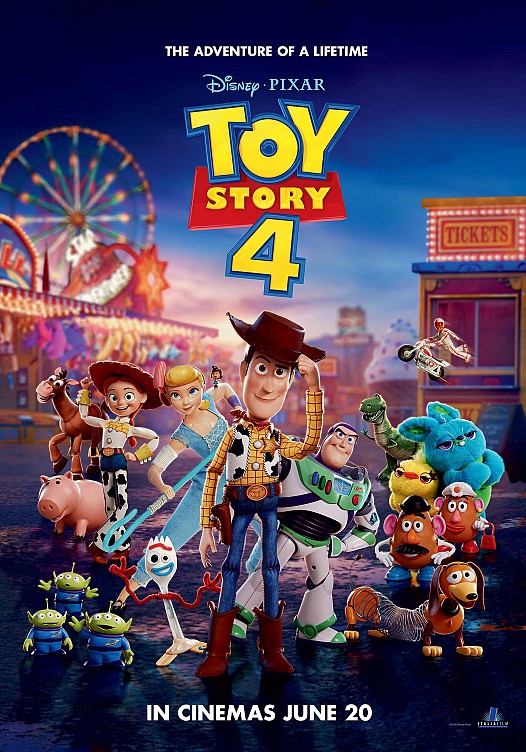 Animation: 5/5
Performances: 4/5
Screenplay: 2/5
Editing: 4/5
Score/Soundtrack: 4/5
Entertainment Factor: 3/5
Verdict: Like almost every 90s kid out there, I grew up watching Woody and Buzz's adventures. I used to love the Toy Story franchise and considered it to be the Holy Grail of animated films. However, its many flaws (especially in the third installment) started to appear to me when I rewatched the trilogy a couple of years ago for the first time as an adult. And just as fast as I fell in love with it, I started to pull away from the franchise. I wasn't excited when I heard that a fourth entry was in the works, and none of its trailers grabbed my attention and made me rethink my devotion to the series.
But I am fully aware that trailers can be deceiving, and decided that watching it was the only way to find out if I was in right or in the wrong. So watch it I did, and disappointed I was. Much like the new character of Forky, I couldn't understand the reason behind "Toy Story 4"'s existence. Despite some great (but in no way revolutionary) animation and pretty good voice performances, I had a very difficult time caring about anything that was going on screen. I could see the emotions brought by the story, but never felt them myself. I didn't laugh, I didn't cry, and I found myself blankly staring at the giant screen for 100 minutes. The new, more mature themes of existentialism and purpose brought by Forky are barely touched on at the beginning of the movie and never mentioned again later on. The new characters were very hit (Keanu Reeves as Duke Caboom was a delight) and miss (Key and Peele were borderline annoying). The story never feels fresh and is even brought down by quite a few corny moments and conveniences I couldn't buy at all. In other words, I just found the script to be... lazy.
If you're looking for a film to watch with your family and kids, then I do recommend "Toy Story 4" as I do believe that children will find it entertaining, but as a standalone film with a beginning, middle, and end, which is how I personally looked at it, it just failed to keep me invested through most of its runtime.
FINAL GRADE: 5/10