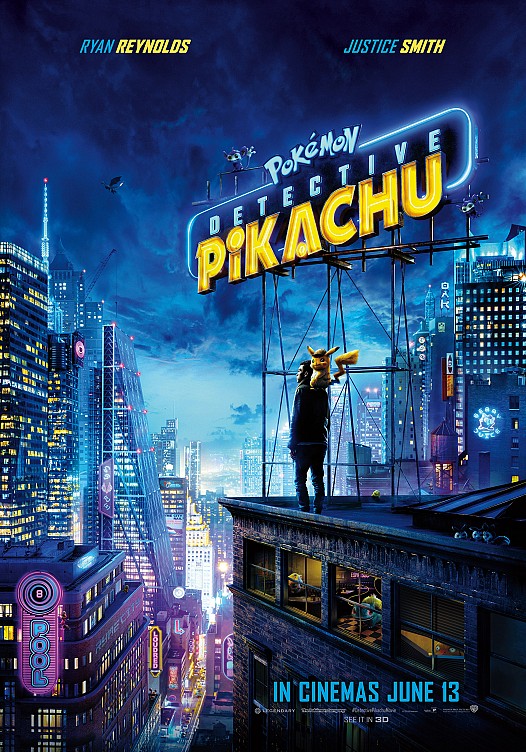 Performances: 2/5
Screenplay: 1/5
Special Effects: 3/5
Editing: 2/5
Cinematography: 2/5
Score/Soundtrack: 2/5
Entertainment Factor: 1/5
Verdict: I love Pokemon. I grew up watching the show, collecting the cards, and playing the games. I revisited the first movie not long ago and still found it entertaining for what it is. I, unfortunately, cannot say the same about "Detective Pikachu" at all.
The film, directed by Rob Letterman, doesn't have a single redeemable quality. Sure, it contains creepy-looking, averagely animated Pokémon (what the hell was that Gengar?), but it never felt like a Pokémon movie. It never even felt like a movie, but rather an opportunity to shamelessly cash in on a franchise loved by millions of people. I mean, the story was dull and cliché, the characters were laughably two-dimensional, the humor was dead, the acting was terrible, and Reynolds was a distraction more than anything else. The (many) exposition scenes are just thrown at the audience through flashbacks, explanatory videos, and poorly written narration, which makes me think that the film wasn't even made for fans of the Pokémon franchise, but rather children who were never exposed to it in their lives. However, my biggest complaint about it is the fact that it lacks the main element that makes the series such a great one: heart. The very few scenes that are supposed to deliver that are so poorly executed and acted that they just came off as cringe-worthy and boring. The dark and gritty look of the film certainly didn't help achieve that aspect either.
"Detective Pikachu" was a disappointment on so many levels, and is possibly my least favorite movie of the year so far. It failed at achieving everything it was supposed to do, and even made me leave the theater not wanting to come across anything related to Pokémon for a while, which is the absolute worse thing I could say about a movie like that one.
FINAL GRADE: 2/10