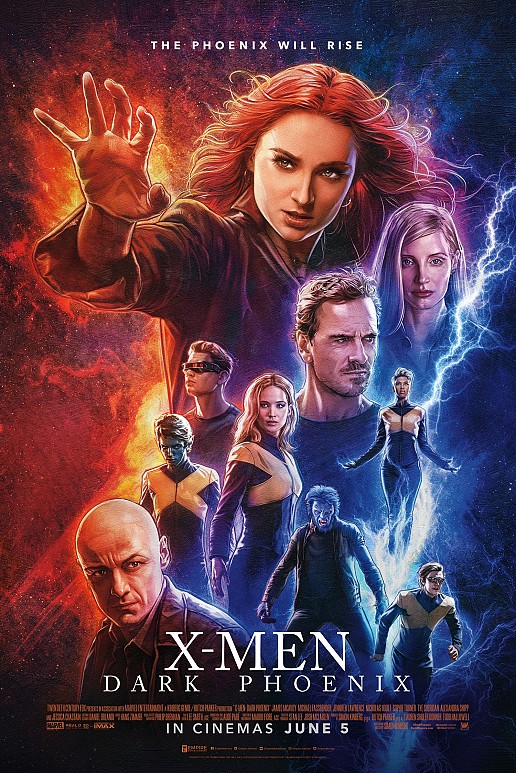 An average ending to the X-Men franchise - 5/10

Performances: 4/5
Screenplay: 2/5
Special Effects: 3/5
Costumes/Makeup: 3/5
Editing: 3/5
Cinematography: 3/5
Score/Soundtrack: 5/5
Entertainment Factor: 3/5
Verdict: The last installment in Fox's X-Men franchise is currently sitting at an 22% on the Tomatometer, making it the series' worst reviewed movie by quite a bit. And while it certainly is no masterpiece, I wouldn't describe as the worst thing to happen to cinema, or even the worst X-Men movie to ever come out for that matter, either.
"Dark Phoenix" is filled with cheese, exposition, convenient character decisions, and unnecessary flashbacks. But aren't most superhero movies guilty of that as well? I don't know about you, but for me these issues can also be found in almost every other Marvel or DC movie that come out nowadays, which is probably why they didn't bother me as much as they probably would have in any other non-superhero film. I'd say that my only main issue with the sequel to the much more boring "X-Men: Apocalypse" would be with its unnecessary main villain played by Jessica Chastain, whose presence didn't really add anything to the movie plot-wise or tone-wise. I also wasn't a big fan of Mystique's arc (nor her makeup), however that didn't bother me as much.
But other than that, there are some aspects of the movie that I genuinely enjoyed such as most of the acting, the majority of the effects, the action scenes, and Hans Zimmer's superb score, which I believe is one of the best of the year so far.
At the end of the day, "Dark Phoenix" was yet another dumb superhero movie with issues that can be found in almost any movie in that genre. It was from being perfect, but it was far from being horrible as well. I would've initially recommended it to fans of superhero films, but I did watch it with some friends who belong in that category of people but enjoyed the movie far less than I did, So go watch it, make up your own mind about it, and let me know what you thought of it!
FINAL GRADE: 5/10