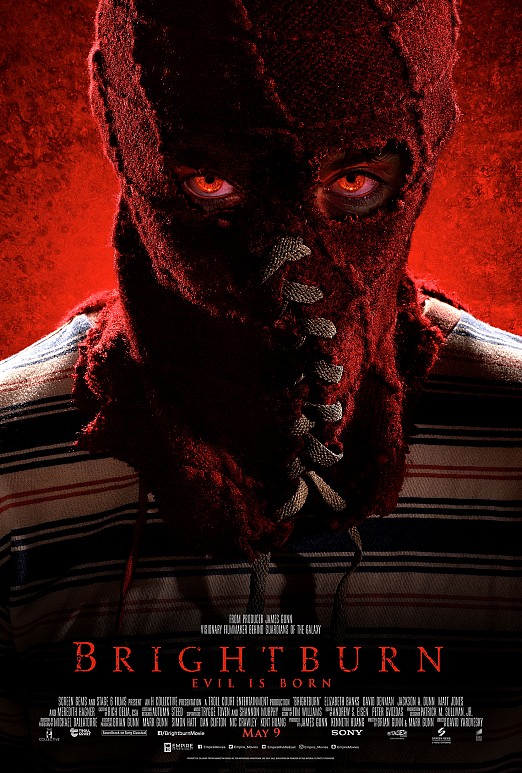 Performances: 3/5
Screenplay: 2/5
Special Effects: 3/5
Costumes/Makeup: 4/5
Editing: 2/5
Cinematography: 3/5
Score/Soundtrack: 3/5
Entertainment Factor: 3/5
Verdict: "What if Superman was evil?"
From producer James Gunn and director David Yarovesky, "Brightburn" attempts to answer that question by telling the story of Brandon, a super-powered child that was found by a couple when his spaceship crashed on their farm. Sadly, the only answer I got from the movie was for the question "What if Man of Steel was laughably bad?".
Written by two other members of the Gunn family, Brian and Mark, the film is filled with wasted potential from a story I'm sure a lot of people, including yours truly, would've loved to see tackled. I mean, imagine getting a film about a superhero who, instead of being shown the correct path by his adoptive parents, was bullied by his surroundings into using his powers for evil purposes. Unfortunately, the film does none of that, instead opting to present a character who is bad for no apparent reason, leading the film to be a cliché, jump-scare fueled, forgettable horror flick with no substance whatsoever.
Paradoxically, the only aspect that brought some enjoyment to the experience was the god awful script filled with cringe-worthy dialogue and idiotic, dully portrayed characters, which fortunately led to some "so bad it's funny" moments that, if watched with the right people, can make the viewing an entertaining one.
The only reaction "Brightburn" brought to me was unintentional laughter, which says more than enough about the film's quality. It doesn't work as a horror movie and the entire concept surrounding it felt more like a gimmick than a twist on the beloved mythos. A disappointment if there ever was one.
FINAL GRADE: 4/10