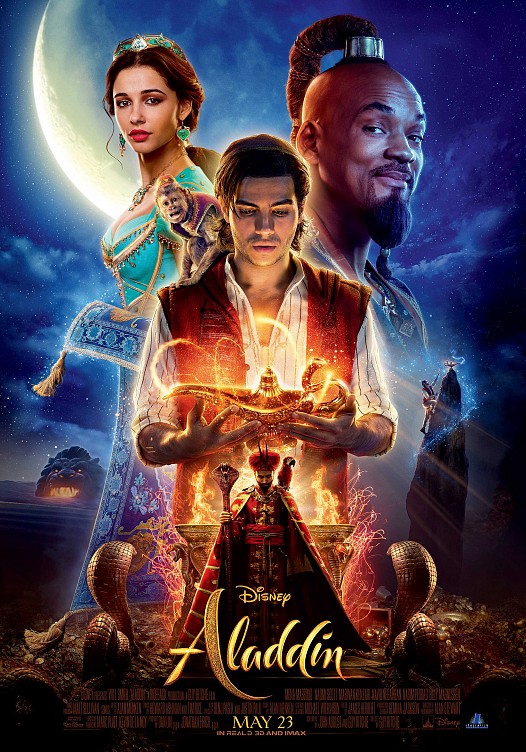 Performances: 3/5
Screenplay: 3/5
Special Effects: 4/5
Costumes/Makeup: 2/5
Editing: 3/5
Cinematography: 3/5
Score/Soundtrack: 4/5
Entertainment Factor: 4/5
Verdict: Well that was a light and pleasant surprise... for the most part!

I'm not gonna lie, I was very skeptical walking into the theater to watch yet another live-action remake of a beloved animated Disney classic that never really sold me with its trailers and general buzz, Walking out of it, however, was an entire different story, and that is despite quite a bit of flaws.
Because, no. "Aladdin" is far from being perfect. In fact, my issues with it would've tanked any other movie. I mean, how can you enjoy a film where the setting and characters feel fake due to inconsistent accents, unconvincing costume design, and an atmosphere that feels more Indian than Arab? Where the title character and his love interest feel more three-dimensional in the two-dimensional original animated feature? And where the once old, menacing Jafar is (very weirdly) turned into a young, bland character that ruined almost every single scene he was in?
Well the answer to that question is twofold. First of all, the music, despite not being very innovative,  added a lot of charm and magic to a film that depends on it to work. But what truly saved "Aladdin" for me, and I never thought in a million years that I'd be saying that, is Will Smith's Genie. His take on the iconic character was so natural, delightful, and entertaining that as soon as he's introduced to the story, he completely steals the show and in a way overshadows the mediocre elements cited earlier. The special effects used (apart from the computer generated animals) are also impressive and never feel overwhelming and chaotic.
Don't get me wrong, Guy Ritchie's adaptation is far from being perfect, and there is a lot about it I didn't like. But overall, it is salvaged by great music, convincing effects, and a scene-stealer Genie. I'd be lying if I said that I wasn't constantly smiling throughout the second and thirds acts, and I would recommend checking it out if Aladdin was a big part of your childhood or if you're looking for something to watch with the family.
FINAL GRADE: 6/10 (OKAY)