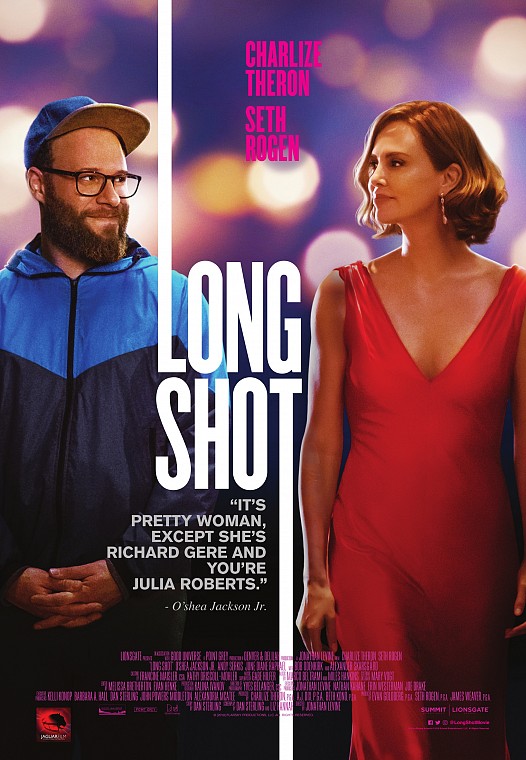 Recycled, long, and tedious despite a couple of laughs here and there - 4/10

Performances: 6/10
Screenplay: 4/10
Costumes/Makeup: 6/10
Editing: 4/10
Cinematography: 5/10
Score/Soundtrack: 5/10
Entertainment Factor: 4/10
Verdict: I really didn't know what to expect from "Long Shot". I mean, none of the trailers really grabbed my attention and I wasn't even planning on watching it, but the generally positive reviews and praise it received convinced me otherwise. And while I certainly wouldn't qualify it as bad, I do, however, have to say that I was incredibly bored during most of its seemingly interminable 2-hour runtime.
To be quite honest, the first 20 minutes or so of the movie had me laughing on multiple occasions. The jokes were edgy and funny, their delivery was nailed, and the atmosphere altogether pretty pleasant. But everything came to a halt as soon as the two main characters played by Seth Rogen and Charlize Theron met on screen, paving the way to what would become an awkward, cheesy, and cliché romantic comedy in which neither the romance worked as the chemistry between the duo was nowhere near convincing, nor did the comedy which mostly relied on recycled, predictable, unoriginal jokes that went on for too long.
"Long Shot" definitely did have its moment, but ultimately ran out of fuel pretty quickly, leaving us with a couple of laughs in the remaining 90 minutes. It's a movie destined to be lost in the very long list of similar comedies that came out in the past few years and one I'll probably forget in a week's time.
FINAL GRADE: 4/10