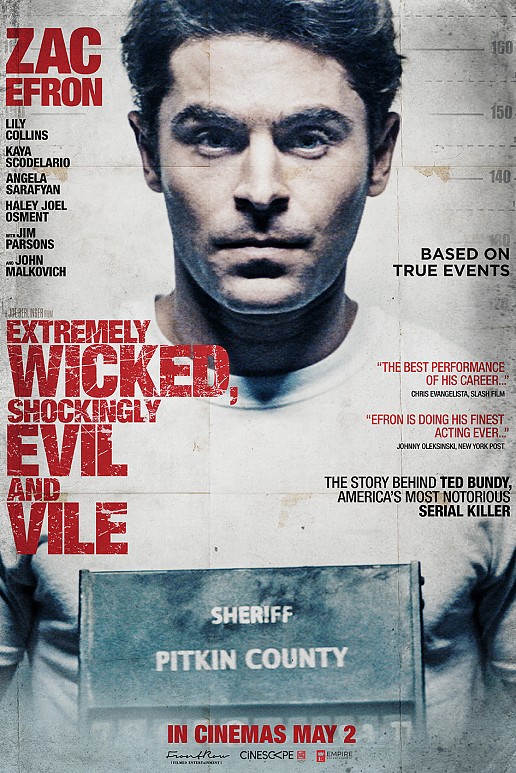 Performances: 6/10
Screenplay: 3/10
Costumes/Makeup: 6/10
Editing: 3/10
Cinematography: 4/10
Score/Soundtrack: 3/10
Verdict: Having thoroughly enjoyed Joe Berlinger's Netflix docuseries about Ted Bundy that came out a few months ago, I was eagerly waiting to see how his take on the famous serial killer would translate into film. And boy was it disappointing on more than one level.
If you're looking to educate yourself about who many consider to be one of the most charismatic monsters to have ever set foot on this planet, you're not going to get your money's worth with this almost two-hour film that instead oddly throws its focus on his relationship with his girlfriend, a far less interesting narrative than the ones that separated Bundy from other serial killers. I got so much more information watching only one episode of Berlinger's 4 part docuseries, and I bet there's a 20-minute video somewhere on YouTube that will give you a vaster idea of the killer's life than this movie did.
Now if you're looking to watch a well-made, well-paced, entertaining movie, you're sadly also most probably find yourself disappointed by this project which, apart from some decent acting by the likes of Zac Efron, Lily Collins, and John Malkovich, completely fails in delivering a coherent story due to its shockingly chaotic nature. Not one scene felt properly set up, the song choices were more than questionable and tonally off, the cinematography and editing were all over the place, and the script didn't contribute in any way in making either the characters or story interesting.
I'm really struggling to find an audience for "Extremely Wicked, Shockingly Evil, and Vile" except maybe for die-hard fans of Zac Efron who will get a more dramatic performance out of the usually comedic actor. But other than that, I'd rather recommend checking out Berlinger's far more layered and fascinating series about who they nickname "The Lady Killer".
FINAL GRADE: 3/10 (Bad)