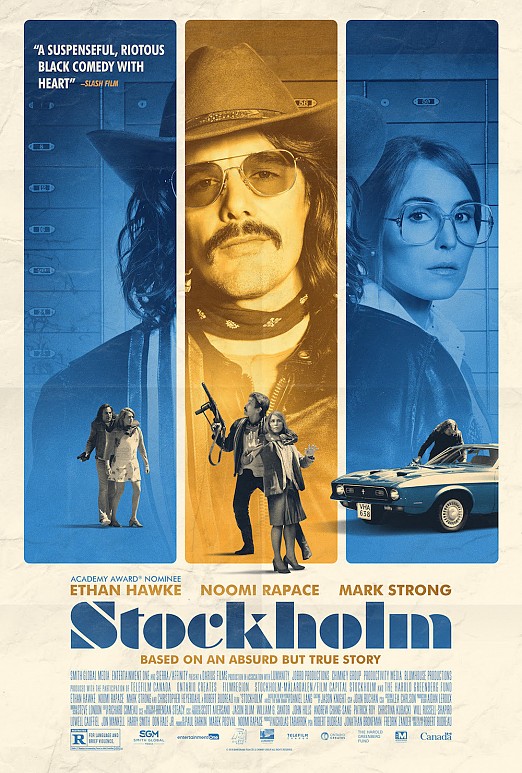 The hilarious true story of a heist gone wrong - 9/10

Performances: 10/10
Screenplay: 9/10
Costumes/Makeup: 9/10
Editing: 8/10
Cinematography: 7/10
Score/Soundtrack: 8/10
Verdict: Everybody's familiar with the Stockholm Syndrom, which is the name of the syndrome which sees hostages developing feelings for their captors. But not everyone knows the story behind the events that gave it its name. This movie tells that story and let me tell you, it's surprisingly as fascinating as it's hilarious and entertaining.
Directed by Robert Budreau, the film focuses on a hostage crisis in Stockholm that took place in 1973 where a self-proclaimed outlaw, played by Ethan Hawke, starts developing a bond with one of his hostages, played by Noomi Rapace.
"Stockholm" reminded me a lot of 1975's "Dog Day Afternoon" and last year's "American Animals", both of which were inspired by true heist and turned into dark comedies led by incredibly likable characters. Ethan Hawke, who plays the likable captor in that movie, proves once again why he's one of the very best actors working today. His comedic timing and natural charm show an entirely new side of the Oscar-nominated actor, more known for playing dramatic roles. The chemistry he shares with the rest of the great cast is undeniably what made the movie one of the funniest ones I've seen this year. The comedy felt incredibly organic and never felt like a distraction from the equally riveting story and negotiation games with the Swedish police.
I absolutely loved "Stockholm" and truly hope that it finds an audience. It's funny, it's interesting, it's well shot, it's incredibly acted, and it has one of the greatest soundtracks of the year (Bob Dylan fans, you really don't want to miss out on the movie). I highly recommended.
FINAL GRADE: 9/10