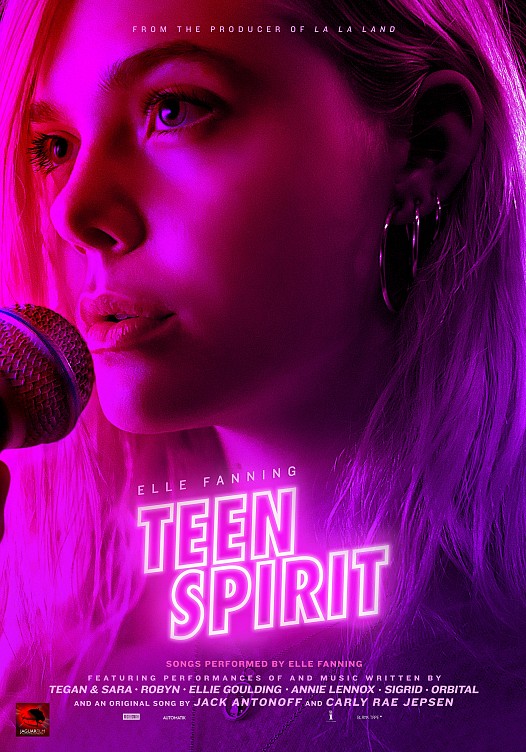 Performances: 7/10
Screenplay: 5/10
Costumes/Makeup: 7/10
Editing: 6/10
Cinematography: 6/10
Score/Soundtrack: 8/10
Verdict: For some unexplainable reason, I was quite excited to see Max Minghella's directorial debut "Teen Spirit". And while I didn't completely fall in love with it, I still found it to be a rather satisfying sort of sad guilty pleasure.
Similarly to "Flashdance", the movie follows Violet's participation in a singing competition that could offer her a career in the music industry if she takes home the trophy.
The film's best aspect was by far the music. The song covers were nailed by Elle Fanning's surprisingly beautiful voice and the sound mixing gave life to a movie that otherwise felt incredibly dry.
For a movie featuring quite a bit of upbeat modern tracks, the color palette used could've benefited from being more colorful as it was surprisingly dark and tame. The same can be said about the characters who are barely set up at all (especially Violet's manager, played by Zlatko Buric) and who cruelly lacked emotion. The story was a pretty straightforward one that only took a few detours that could've been used in a more effective way to develop the character of Violet, but instead only dragged the narrative in an unnecessary way. Finally, and I don't know if that was a problem with the movie or its distribution, but there was quite a bit of  Polish dialogue not translated in English.
Despite all those issues, I still had a blast with the film's musical moments. "Teen Spirit" is far from being a masterpiece, but if you're into singing competitions such as "American Idol" or "The Voice", you might find some enjoyment in it like I did.
FINAL GRADE: 6/10