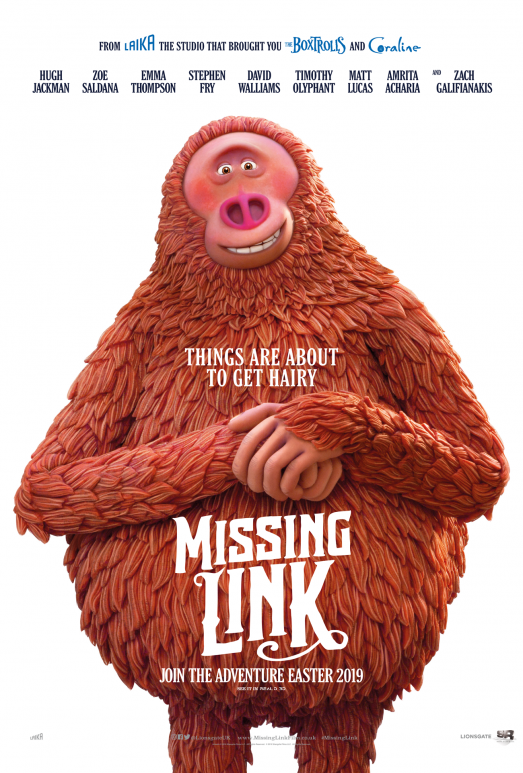 Animation: 10/10
Performances: 9/10
Screenplay: 7/10
Editing: 8/10
Score/Soundtrack: 7/10
Entertainment Factor: 8/10
Verdict: With films such as "Kubo and the Two Strings" and "Coraline", Laika has continuously graced our eyes with some of the best stop-motion animation movies out there. And "Missing Link" is no exception.
Starring Hugh Jackman as Sir Lionel Frost, an adventurer set on finding the lost valley of Shangri-La along with Mr. Link and Adelina Fortnight, voiced respectively by Zach Galifianakis and Zoe Saldana, the movie not only contains the usual superb stop-motion design the studio has accustomed us to in every single one of their features, but also appeals to both kids and adults with its charm and themes about human greed and belonging. The main trio's chemistry, likability, and natural humor are undoubtedly what makes the journey one that will resonate with audiences of all ages, a journey that was enhanced by the story's heart and well-delivered messages.
My only real issue with "Missing Link" was its cartoonish and needless villain that really weighted the movie down instead of elevating it. The film's ending also had some distractingly questionable physics behind it, but I'm sure that most moviegoers' enjoyment won't be affected by it.
I strongly recommend checking out Chris Butler's second directorial contribution to Laika after "ParaNorman" not only because it's a great movie that was worth every penny I spent to watch it, but also because stop-motion animation is a dying medium that truly deserves much, much more recognition.
FINAL GRADE: 8/10