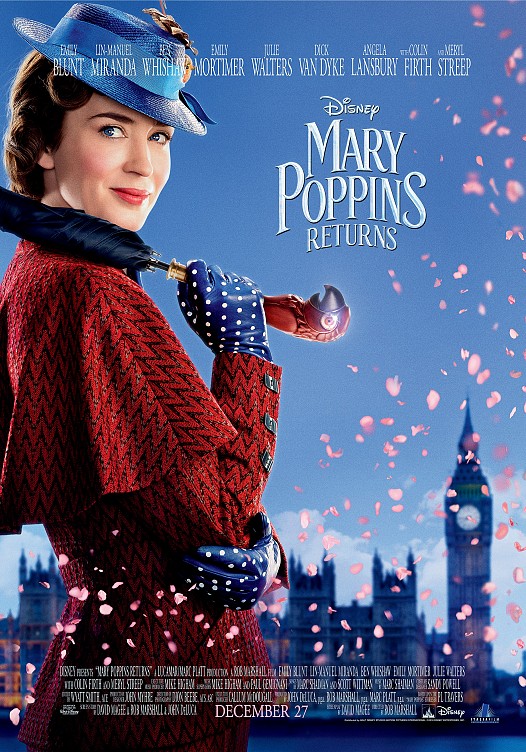 Michael Banks, a single father of three and a bank teller, was in dire need to find a piece of paper or a certificate of some sort which proves that his father had valuable shares in the bank, all that to avoid the repossession of his childhood home. It was a mess until Mary Poppins showed up to save the day!

The minute I saw Ben Wishaw starring in this, my heart instantly skipped a beat and many flashbacks came rushing in! For all those who don't know him, he is one hell of an actor. One of his unforgettable performances would be "Perfume" (scroll back to see my favorite movie review).

Emily Blunt was so graceful and elegant, I'm pretty sure that no other actress would've embodied "Mary" any better. Ben Wishaw was as amazing as ever and Meryl Streep was just too good to be true. Acting is a definite YES! I was helplessly smiling throughout the whole thing. It is one of those "feel good all the time" showpieces. And this is coming from a person who DISLIKES musicals, so me loving it is proof enough of how good it was.

Sequence of events, hidden messages and soundtracks were efficiently infused. I thought that all the constant singing would bother me but they actually filled my heart with warmth. Just a couple of scene transitions threw me out of the story for a while but it sucked me right back in.

It was just too joyful to describe, so you better move your ass and reserve a spot ASAP! People of all ages will surely enjoy this... Highly Recommended.