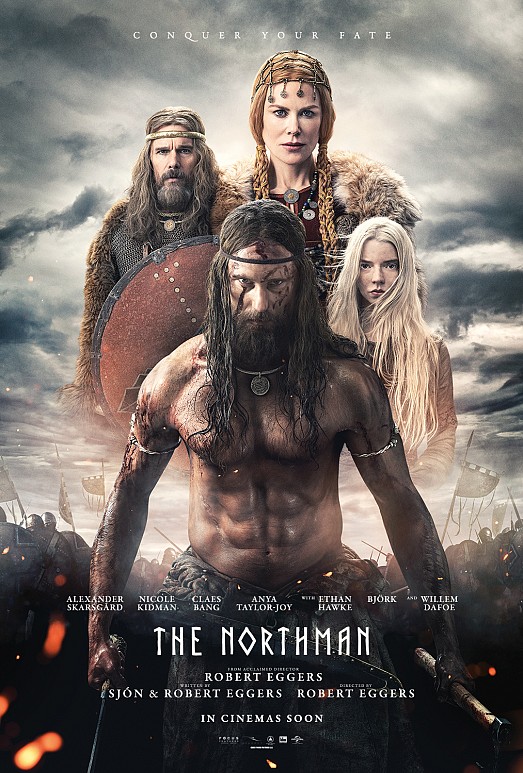 I am a big fan of Robert Eggers who with just 2 feature films has proved himself to be one of the most interesting filmmakers of his generation. The VVitch and The Lighthouse are masterclasses in filmmaking: two hardboiled films made with incredible passion and authenticity. Now, comes his latest outing: “The Northman”, which is another amazing achievement from Eggers.

The film is amazingly atmospheric and visually stunning. Every frame is beautiful and every shot is well-studied and executed. Eggers’ direction and his cinematographer’s work contemplate each other to create an incredibly visually stunning film that is half dreamlike and half hallucinatory. The fight sequences glue you to your seat with perfectly executed long-takes packed with brutality, suspense, and action. Even though The Northman is a more “audience-friendly film”, Eggers never sacrifices his signature filmmaking style or dedication to the film’s themes and history.

Speaking of themes and history, the depiction of Viking culture was breathtaking. The research and work done for this film ooze out of every frame, set piece, song, and line of dialogue. The director is so passionate about the culture that he lets it direct the story. Now the story is the film’s Achilles heel. It is predictable and generic but that’s because it is based on the legend that inspired Hamlet. Regardless, the film is bathed in Viking culture making it refreshing and interesting to watch. The film needed better pacing because sometimes it became a bit jarring in its second act where multiple scenes could’ve been cut. The film does feel superficial and empty overall but it has enough energy and a unique execution to make it worthwhile and compensate for its flaws. The script and the pacing were my biggest gripe with the film but everything else is perfect.

The performances were incredible. Alexander Skarsgård is a beast and Anya Taylor-Joy is a scene-stealer (even though her role was the traditional love interest with not much to do). Claes Bang and Nicole Kidman were amazing to watch. The supporting cast was also well-cast, and let us not forget Willem Dafoe and Ethan Hawke who, regardless of their short screentime, managed to be incredible on screen. I have nothing but praise to the film’s cast.

The film’s score needs a standing ovation on its own. I loved the music, it’s incredibly atmospheric and period-specific. Also, the Viking chants were delightful to listen to. The visual effects work is better than in big-budget movies and it’s actually awesome to look at!

I will keep this brief and say that The Northman is an incredible Viking epic that is bogged down by a weak and deja-vu script that harmed my viewing experience. Regardless, I still think the Northman is a very good film that is not to be missed on the big screen. It transports you to its own world and takes you on a unique cinematic experience.

I’m looking forward to Eggers’ upcoming project and hopefully, he gets to make his Nosferatu film.